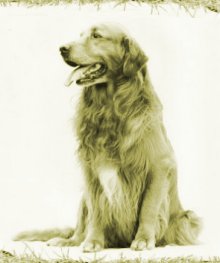 ABOUT US
Goldridge started with the gift of a lovely Golden Girl named Sundance Lady. She played with the children and accompanied us to the school bus stop every day. After Sunny came Titan Wanderer of Goldridge. A beautiful dark Golden boy who loved and was loved by everyone he met.

He was joined by Amberwine Goldridge Ember, a sweet, smart Golden girl and together we started our first adventures in the obedience ring. They both earned Companion Dog titles and were the constant companions of the children. Goldridge Que Sera was the daughter of Titan and Ember and she too excelled in the obedience ring. Sweetgrass Goldridge Claret (Strider) joined us from the west coast as did Sweetgrass Luckee Jubilee (Fiesta), both were obedience titled.

Another west coast dog , Timberline Sweetgrass Pride, CGC joined us. Taking a leap into the breed ring with Cacharel's All Hallow's Eve (Halle) who was our first breed champion. Her sons Goldridge Dance On The Edge (Chance) and Goldridge Galexy Dancer (Comet) also finished their breed Championship. A daughter, Goldridge Dancen In Diamonds (Fancy) was also pointed.

Keeping a pup from Chance who is Lycinan Goldridge Point of Freedom, (Hudson) he also finished his Championship. Hudson was named by and lives with my Granddaughter, a graduate of West Point Military Academy. While she served in Afghanistan he lived with me and earned his breed championship also. Now happily living as an “army brat” he is as lovely as ever.

In 2008 and we were joined by Bonacres Goldridge Summer Madness CD, RN,CGC and currently training for more obedience titles. She was bred to CH. Chantelle On Your Mark and had 9 lovely pups. Two of them live here, Goldridge The Dream Keeper and Goldridge Alicenwonderland and have promising show careers.

All of my dogs have hip, elbow, heart and eye clearances. Breeding for good looks, good health and the wonderful Golden temperament.